Sacher Torte is a decadent chocolate cake with a touch of apricot jam coated in pure chocolate from the capital of desserts. It’s The Chocolate Cake.

As I lately have some time, I was browsing on the web the other day. In need of new, challenging thoughts, inspirational dishes that I’ve never tried before, to delight my family with. Hunting for a while yet couldn’t discover lots of interesting stuff. Right before I thought to give up on it, I stumbled on this delightful and simple treat by chance. It looked so scrumptious on its snapshot, it called for prompt actions.

It absolutely was not difficult to imagine the way it’s made, its taste and how much my husband might like it. Actually, it is very easy to keep happy the guy in terms of cakes. Yes, I am a lucky one. Or maybe he is.Anyway, I went to the blog: Suncakemom and used the detailed instuctions which were combined with great pics of the method. It just makes life much simpler. I could imagine that it’s a slight effort to take photographs down the middle of baking in the kitchen because you usually have sticky hands so I really appreciate the time and energy she placed in to build this blogpost .

Having said that I’m empowered to present my personal formulas in the same way. Thanks for the concept.

I had been fine tuning the main recipe to make it for the taste of my family. I’ve got to say it had been an incredible success. They loved the flavour, the structure and loved having a treat like this in the middle of a stressful week. They basically requested even more, more and more. Hence the next time I am not going to commit the same miscalculation. I am likely to multiply the quantity .

Many Thanks to Suncakemom for the awesome Sacher Torte. 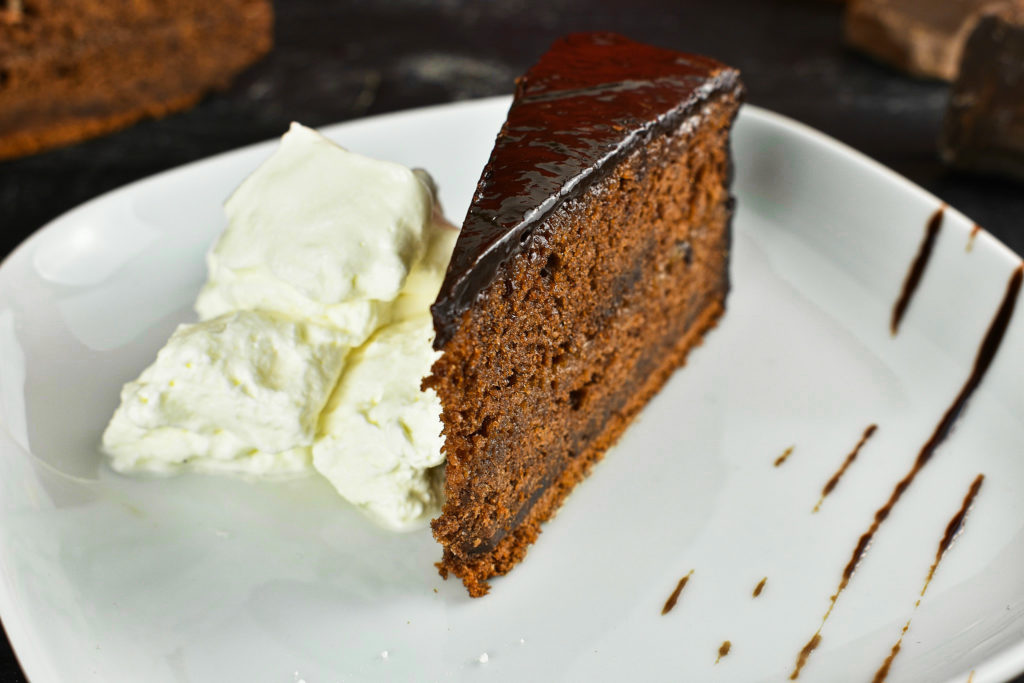 Beat butter in a different mixing bowl until soft then put honey and vanilla extract into it. Keep beating until the mixture gets light and fluffy.

Pour batter into the cake tray and stick it to the preheated oven for 40 minutes to bake.

Check it with a toothpick if it is baked properly.

Place cake base onto a rack and leave it there to cool down.

Whilst the cake is cooling, place the jam into a saucepan to warm it up to get a slightly runny consistency so when it is spread on the cake it’s easier to work with.

Cut the base into half horizontally.

Spread half of the apricot jam on the bottom half and place the other half of the cake on top.

Spread the rest of the jam on the top half.

Melt the chocolate, cocoa and the piece of butter.

Pour whipped cream into the saucepan with the chocolate bits.

Stir occasionally until melted chocolate is completely incorporated with the butter and whipped cream.

Pour chocolate icing on top of the cake.

Spread it evenly on top and the side.

Place it in a cool place until the chocolate hardens.