How many soups are out there and since when have we even cared? Let’s just make a tasty fish chowder and let the world take care of the rest!

As I most recently have some time, I had been surfing on the internet the other day. On the lookout for new, fascinating tips, inspirational meals that I have never used before, to delight my family with. Hunting for a while yet couldn’t discover too many interesting stuff. Just before I wanted to give up on it, I ran across this scrumptious and easy treat by accident over Suncakemom. The dessert seemed so scrumptious on its pic, that called for instant action.

It had been not so difficult to imagine the way it is created, its taste and how much my husband might want it. Mind you, it is rather simple to please the man in terms of desserts. Yes, I am a blessed one. Or possibly he is.Anyhow, I went to the website and then used the step by step instuctions that had been accompanied by wonderful images of the procedure. It really makes life less difficult. I can suppose it is a bit of a effort to shoot pics in the midst of cooking in the kitchen as you may will often have sticky hands thus i really appreciate the hard work she placed in to build this blogpost .

With that said I’m inspired presenting my personal recipe in the same way. Thanks for the idea.

I was fine tuning the main formula create it for the taste of my family. Need to say it absolutely was a great success. They prized the flavour, the overall look and loved getting a treat such as this during a hectic workweek. They basically asked for even more, many more. So next time I’m not going to commit the same miscalculation. I am likely to multiply the quantity .

The original Fish Chowder is provided by SunCakeMom 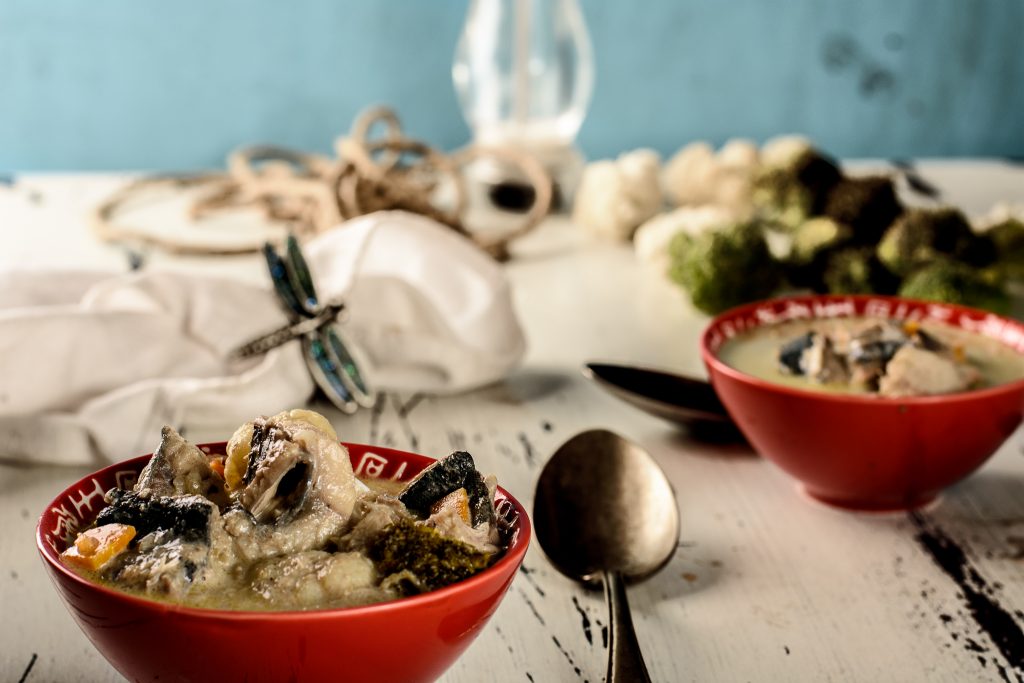 Gut and clean the fish.

Remove the head and the bones as much as it is possible then slice up the fish fillets.

Rinse the head and bones then add them to a pot of water.

Bring it to boil then simmer until the meat separates from the bones for about 30 minutes.

With an immersion blender, or puree the fish and the bones as much as possible.

Run the fish stock through a sieve to remove remaining fish bones. Scrape through as much fish as possible. This is a rather ungrateful part, even if we have a special equipment to make it easier.

Melt butter in a frying pan then saute the diced onion, carrot, celery and salt on high heat until the onion gets a glassy translucent look for about 5 minutes.

Reduce the heat then slowly fry the vegetables until they caramelize for about 15 minutes.

Increase the heat then add the optional vegetables and the fish chunks.

Stir fry for about 3 – 5 minutes. (If frozen vegetables are used more time is needed but not for the fish.)

Add the fish stock and cream then bring it to boil. Take it off heat, let it cool a couple of minutes then serve.